Iraq: “Our Lord, surely, will hear the voice of good people”

Full transcript of the interview with Shlemon Warduni, auxiliary Bishop of Baghdad of the Chaldean Catholic Church. News feature, in Portuguese, here.

What brings you to Portugal?
The Aid to the Church in Need wrote to me, saying that they have these meetings, as propaganda for the churches in the Middle East, especially in Iraq and Syria. Our Patriarch was here three years ago, and now he was in Rome with the Pope, with all oriental Patriarchs, so he asked me to come here, so I came.

Violence in Iraq has become much worse over this past year. Why?
First of all we are so sorry about this violence, because it is terrible for all people in Iraq. But why and how? It is too difficult to know, because there are many causes. First of all, the elections that we will have in April; secondly, there are many interests; third there is this fanaticism between confessions and sometimes between religions also.

It has been some time since we hear about violence in Iraq against Christians. Has the situation improved?
I think in general it is better not to speak about persecution, but sometimes that is what we feel that, in those who are fanatics.

But the general bad situation is not only for Christians. The war, or the car bomb, or suicide attack, they don’t know who is a Christian or a Muslim, who is a child or an adult. When the bomb explodes, many are killed.

But sometimes we have this insistence with Christians: If you don’t become Muslim you will be killed, you must leave your house, or give us your daughters for our princes. A few years ago they took our bishop [Faraj Rahho] who died. I was negotiating between the Church and these people who kidnapped the bishop and the other priests. These people have no conscience, no God. They just want money, or then they don’t like Christians.

Once I was trying to liberate a priest and I suggested a sum of money, for example 4.000 dollars, and he told me, we cannot by a cow for this price. They don’t have the value of the human person. It is difficult, because they’re education is only that. They want money to kill others, why? We don’t know. Even back in Iraq they say, these people have no religion. For that we are sorry to have this situation.

But yes, it is better, over the past two or three years. But over the past three or four months we have had a bad situation, because of the explosions. Anyhow we pray. Also the Muslims are very sorry when they hear about the kidnap of a priest or a bishop, or about the tragedy at the Lady of Salvation church [where dozens were killed].

In the church and everywhere we talk about peace, reconciliation and forgiveness. Of course those who lost relatives find it difficult to understand forgiveness, but the spirit of Christianity is this and they understand and they try to live it, but many of them are leaving because of this situation. When we try and tell them to stay they ask, can you preserve my life or my family’s life? I say, I cannot preserve my own life, how can I preserve yours? But we trust in our Lord Jesus Christ, who died for us. 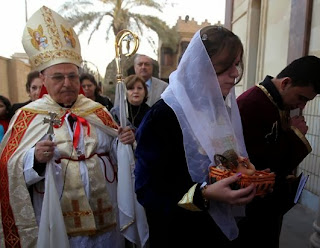 I know the bishops have always refused to arm the Christians, but have there been any attempts of the people to arm themselves?
We have Assyrians, they have some weapons. We also have some guards. They became soldiers for the Government, or police, and they guard.

But in general, the arms don’t resolve problems. Even in our situation, it is more difficult with arms, than without arms. Because if they kill Muslims, there is the question of revenge, and they will come to kill, or get money. It is better not to have weapons, so as not to aggravate the problems.

Recently we heard the Melkite Patriarch ask “Does anybody hear our cry?”. We hear you cry, but many people ask… what can we do?
Many times I said that Europeans don’t care about Christians. If a small Muslim child is harmed by Christians in any country, all Muslims in the world come and cry “we must kill…”, “we must do…”. But when many Christians, bishops and priests are killed, the European Christians, or in general the Europeans who speak about our freedom, don’t do anything. They talk about human rights, but many of them are interests. In Iraq they talked about WMD’s, and they didn’t find any chemical weapons.

Iraq is a very rich country. Our Lord gave us richness, but we are very poor. Why? Because of buying weapons, and fighting. No peace. What is the reason? We hope that somebody from the world leaders understands the meaning of the church not wanting weapons.

But you are talking about leaders. What about me and my family, what can we do?
First of all, you can pray. We cannot do anything, but we pray also, with you. Our Lord, surely, will hear the voice of good people. The second thing is to pressure leaders not to go to war. For example, Pope Francis, said: “We must pray and fast”, and the majority of the people say it was a miracle of prayers and fasting [that helped avoid international intervention in Syria].

Many Christian leaders must act as Christians. Why are they afraid, at meetings like this: “You can end the war. First, don’t sell weapons; second, speak to Arabic leaders and ask them what they are doing; third, the terrorists, who are giving them weapons? These are things that can be done.

There are many different churches in the Middle East. Chaldeans, Melkites, Maronites, Syriacs, Armenians… and then all the different Orthodox churches as well… This variety may be enriching from a liturgical and spiritual point of view, but is there enough communication between the bishops? Is it possible to improve the coordination, have the Christians speak in one voice, without destroying this richness?
And we have protestants also. Especially those who came after the war. They think we are not Christians… sometimes they baptize our faithful…

The issue of the church is a little bit weak, because there is no unity among us. Not unity as in having just one leader or liturgy, but at least to be one as Our Lord said, to love one another as he loved us. Are we ready to love one another? Jesus gave his life for us, He sacrificed His life.

This is the first question. Our churches must come together in the heart, to love one another, to love the good of the Church of my Armenian, Syriac or Orthodox brothers, more than I love my own. In this case we will give a good witness to others. This could be our strength. This is the first thing, many others will come afterwards.

In 2010 there was a synod of Middle Eastern bishops. Two years later, in Lebanon, Pope Benedict XVI delivered the Apostolic Exhortation… What did you think of the text?
And since we have had a synod in Lebanon, also, talking about how we can live this document. Sure, it was very good. “Communion and Witness”, but many times, unfortunately, we talk too much but in reality do little, or even nothing. So we hope that the Holy Spirit, and especially for this year that ended today, or rather, that we have to live from here on, that we can have a good life, living our faith and witness with communion with others. Then, I hope, sure, there will be good results for all the churches.

At least two of the things that had been requested by the bishops were denied by the Vatican. I am thinking of the authority of Patriarchs over their faithful in the diaspora, and the ordination of married men to the priesthood outside of traditional territories… I have heard some Eastern Catholics say that things like these make them feel like second rate Catholics…
Sure, on one hand. These two things affect sometimes negatively. Why? Because our brothers can ordain many priests, as many as they want. But our catholic churches are almost captive, they cannot do what they want.

Slowly, I think these two things will be given. By Pope Francis… we shall see. The Patriarchs want this. Not so as to have married priests or not, but because we are not allowed to do it in the West. But sometimes we send over married priests and they do their job. The more difficult is the question of the authority of the Patriarch, but that also I think, through dialogue will be resolved.

Are you expecting any changes in this respect from Pope Francis?
For the future I cannot decide. But I say, we hope, with dialogue, with an open mind, with theological discussions, I hope something will be done about this.

There is a terrible situation in Syria. There are two bishops who were kidnapped and a priest as well. Do you have any hope that they will be returned alive?


Not just one priest, two or three, and many other people. But this question is very difficult, especially because of other countries. They must make efforts to be near each other, for forgiveness and dialogue, but many do the opposite. They arm the terrorists; they arm the government, so how can we have peace? But we pray, because we are children of hope, that these people are alive. This is all we can do, and we continue to pray.
Posted by Filipe d'Avillez at 17:24