Meditation is a discipline of love 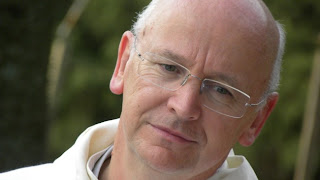 Full transcript of the interview with Laurence Freeman, OSB, coordinator of the World Community for Christian Meditation. News item can be found here.

When we think “meditation” we think Buddhism, Hinduism, Eastern religion. Why is this wrong?
Meditation is a universal spiritual wisdom, we find it in all the great religious traditions of the Human family, we find it at the core, in fact, of all the great spiritual traditions.
In Christianity it is to be found, it is present, but for various historical or cultural reasons it became marginalized, especially in Western Christianity. In Eastern Christianity it has always been more mainstream, through the practice of the Jesus Prayer, the prayer of the heart and the hesychast tradition of prayer, but in the Western Church our prayer became very head centred and of course mental prayer is a valid form of prayer, but there is also the prayer of the heart and this is where meditation finds its meaning.
In recent years there has been a great recovery of this tradition of contemplative prayer in the life of the church and it allows us to make sense of Jesus’ teachings on prayer. When you look at His teaching in the Gospels, you see that He is a teacher of contemplation, He doesn’t give us rules and regulations about prayer, He says: “When you pray go into your inner room, close the door, and pray to your Father who is in that secret place of the heart”. He tells us not to use many words when we pray, but to trust that God knows our needs before we ask. So all the elements, the essential elements of Jesus teaching on prayer, are contemplative.

Is that one of the problems with Western Christianity? Do we pray with too many words?
We have become far too head-centred in our spirituality. It’s one of the reasons why people want a more integrated spirituality, with the body and the mind and the spirit harmonized, and this is what human well-being is about, our destiny is to experience the presence of God as a whole person, every aspect of our being is brought alive in that knowledge of God.
I think we are very weak in Western Christianity and maybe even in Eastern Christianity, in spirituality of the body and its one of the reasons it is difficult for Christians to communicate their spirituality to a secular world.
Meditation is not mental prayer but it is the prayer of the heart, and the heart is a symbol of the wholeness of the person. The heart is not just about feelings, it’s about that point of integration, that is one of the reasons people experience physical well-being as a result of meditation, it reduces blood pressure, improves cholesterol, reduces stress and so on, that is true, valid and interesting, but from a from a spiritual point of view this is a sign of Grace working on nature, the spirit working through the body, so meditation is very much a spirituality of the whole person.

Was there a tradition of Jewish Meditation at the time of Jesus, for example? Is that where we get our tradition from?
It definitely came from the teaching of His own Jewish tradition. It was a teaching that was largely oral, it was passed on from teacher to disciple, rather than being written down.

Does this make Christian meditation different from other religions?
It’s different and similar at the same time, just as our bodies are. Our bodies are different from people in Asia, although we recognize them as fellow human beings, so there are similarities but also important differences. Over the years I have had several dialogues with the Dalai Lama and he often says: “We have to take the similarities and the differences equally seriously and balance them”.
So in that sense meditation is universal, you can recognize it in all the different traditions, it’s about silence, it’s about stillness, simplicity, moving from the head and thought into the heart and into a level of personal experience. So in that sense it is very similar. 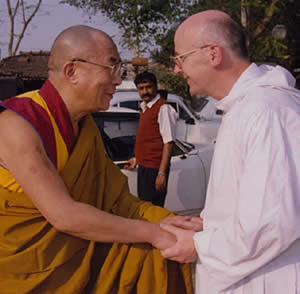 The challenges are also similar, as we all experience distraction, we all find it difficult to pay attention, it’s difficult to have discipline. Meditation isn’t just a pill you take when you have a headache, meditation as a spiritual practice is part of your way of life, It takes time, you can’t rush it. You can experience the benefits of it quite quickly, but it requires time and perseverance. So in that sense they are very similar and for that reason you can say that meditation opens up the common ground between all religions and cultures.
We are living in a world of great divisions, crises, great confusion. We have huge problems to face globally and our institutions are not very good at solving them because we approach them, at the moment, in the wrong way. These are global problems but we are approaching them from a point of view of self-interest, nationalism, we don’t have the big picture in our minds.
Meditation helps to create the big picture. It helps to create not only a more compassionate and spiritually oriented set of values. Society has become excessively materialistic in its values, we’ve lost touch with an interiorized value system, you need only to look at this financial crisis. So we need to open our minds and hearts and meditation gives us the potential to develop a whole new kind of consciousness to deal with our man-made problems.

What are the differences?
Well the differences are particular to every religious tradition. If you were to ask what makes meditation Christian I would say first of all our faith in Christ. We are in the Easter season, we believe that Christ has risen and that He dwells within us and among us. So that faith, it might be well developed, it might be very small, it might be like a seed, but I believe that some kind of seed of faith is necessary. It is also Christian because we meditate within a historical tradition. There is a lineage, I mentioned the teaching of Jesus on prayer, but there is a whole Christian tradition between then and now.
We also come together to meditate. Where two or three gathered in His name, He is there. Here in Portugal we have many weekly meditation groups that meet in people’s homes, churches, schools, hospitals, prisons. This coming together represents the mystical body of Christ.
We also practice other parts of the Christian tradition. Pilgrimages, reading scripture, the Eucharist, the sacraments, all the other spiritual forms of life we have developed, these are part of the whole picture. These are some of the elements that make meditation Christian, but at the same time it is universal, like Christ, a particular person but a universal person.

You belong to a cloistered religious order, yet you travel frequently and write publicly… does this make meditation harder?
Well I have to balance it. In between my travels, I take some time for quiet. Of course I have my community as well, that I go back to, and it’s very nourishing and stabilizing.
I also take time for solitude, I think I need perhaps a little more in order to balance the time spent travelling.
It’s true, I travel a lot, I came from London today, I arrived at the airport, my friends from the Portuguese meditation community met me at the airport so I was immediately in the community. These next few days we will be meditating three or four times a day together, so it is travelling, but it is really like travelling in a monastery without walls.

What advice would you give to somebody who is interested in starting meditating?
Trust your own instinct. If you feel drawn to it, interested in it, don’t just think about it and don’t just read about it but practice it. You will learn more from practice than study and reading.
Secondly try to connect with a group, a community, other people on the same path, because that will help you immensely to strengthen your own practice.
Try not to evaluate your progress. Everything else in life today, we are being evaluated, judged or compared to others. This is one aspect of our life in which we don’t need to be evaluated or judged in any way. If you get that clear in your mind when you start, you’ll find it is a simple path, most people will start with some enthusiasm, many of them will stop after a few days, weeks or months, and then they will start again. So be patient, don’t give up, but if you do give up, come back.
And be gentle but serious about it. This is a gift that is so precious, simple and free, there is no pill that can compare to it. There is no qualification or worldly success that can compare with this experience of yourself as a spiritual being, held in the love of God. This is what our life is about, and it is not complicated.
Meditation is not a technique. When you begin it may feel like a technique, that you are not very good at it, and that you are failing. You have to go through that period and realise that it is not about mastering a technique or understanding a lot of theory, it is about something so simple and immediate, it is about being yourself.
It is a discipline of love. All love has an aspect of discipline. You’ll grow into that and you’ll experience it for yourself.
At the beginning of this Christian tradition of meditation there was a monk called John Cassian who said that “experientia magistra”, “experience is the teacher”, so just be open to the experience.
Posted by Filipe d'Avillez at 14:55