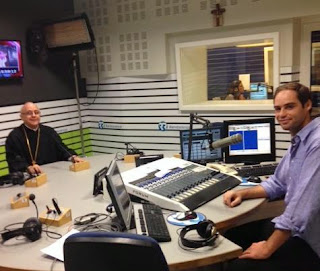 Full transcript of my interview with his grace Archbishop Issam John Darwish, of the Melkite Archdiocese of Furzol, Zahle and the Bekaa. News report (in Portuguese) here.

You are here to speak on Religious Freedom in Lebanon, what is the situation in your country like?
First, let me thank you for welcoming me to this station, and thanks to the Church in Need for inviting me to Portugal to speak about religious freedom.

In the Arab world there are some difficulties in Religious Freedom. But I will start with Lebanon. There we don't have any problems, because we are free to worship in any religion. We have 18 sects and anyone is free to worship. The political power in Lebanon is divided between the 18 communities.

In Syria and in Iraq the constitution also permits freedom of religion, but actually, if you have a mixed marriage between a Christian and a Muslim, they must register it under Islam.

In other Arabic countries it is very hard to worship as you like. In the Gulf they have started to build churches, but for example in Saudi Arabia we are not permitted to identify as Christians.

The Arab spring did not advance anything in the Arab world, neither democracy nor religious freedom. But we hope, in the future, after the events in Syria and in Iraq, that we can have a transparent Islam, share our lives and be free to worship as we like.

At the moment the situation seems better in Egypt, though...
Yes. There is more peace now.

Last month I was in Egypt. I was invited by the minister of Tourism, to open the Holy Family Road. Jesus, Mary and Joseph went to Egypt, to 25 places, and the tourism minister chose seven places with the Orthodox Patriarchate of the Copts for tourism sites. Representatives of all the churches were there for the inauguration.

With the new president, and the new regime, it is more peaceful. They respect all religions and we hope that will continue in Egypt.

Lebanon is, as you were saying, a special case. What is the situation of relationships among different Christians? It seems that they are divided.
No, the Christians are not divided politically.

There are two parties, one which sides with the Sunnis and one with the Shiites. But it is not a religious divide, it is a political divide. There is a dialogue between the Christian communities and we live together as brother and sister.

In my town we celebrate the liturgy and the mass together, we celebrate feasts together, and in Zahle, where I am a bishop, the bishops meet every month and decide things together. There are no problems within Christian communities.

But as you said, there are two parties, one allied with the Shiites, one with the Sunnis. Does that weaken the voice of the Christians?
I don't think so because the mentality of the Christians is more democratic. The diversity in the Christian community is for the benefit of the country. That is why we try to avoid the war, we try to be part of the society and we like to be together. I am the head of the Christian-Muslim dialogue in Lebanon. I speak in the name of all the Catholics in Lebanon, we have good relations with the Sunnis and the Shias, we live together, we are together for each other's feasts, and we try to help those Muslims raise their voices against the jihadists, the fundamentalists, that we see in Iraq and Syria.

Most of the threats to Christians seem to be coming from radical Sunni factions. Could the future of Christianity in the Middle East be tied up to Shia Islam?
I think we should be close to both, to Sunnis and Shiites. We are a bridge between communities and would like to play this role to bring them together.

Iran has a big influence in the region. What is the situation like in Iran at the moment?
I don't have the impression that Iran is radical. They are very open. I know a few Iranians, who have come to Lebanon, and I know the Shiites, they are very open now and more open to the Christian people.

Iran supports Hezbollah, largely through Syria. If the regime in Syria were to fall, how would that affect the balance of power in Lebanon?
It will be a big problem for the Christians in Lebanon and in Syria. We know that the Shiites are influenced by Iran and the Sunnis are influenced by Saudi Arabia. I think when the problems started in Egypt we started to have a problem in Lebanon and Syria. That is why last month I told a few ministers in Egypt to use their influence over the Sunnis in Lebanon, because I know that the Egyptian way is more moderate than the Wahhabis from Saudi Arabia.

How has Lebanon managed to avoid being drawn into the conflict until now?
From the beginning of the war I said in one of my speeches in Lebanon: “Be careful, the people in Lebanon will be influenced by the war in Syria.” And we are now... the jihadists, the Daash [Islamic State], the Al-Nusra Front, are now on the border of Lebanon. They are not far from my town, Zahle, they are in the mountains. And every day there is a fight between the Lebanese army and the Jihadists.

Also, Hezbollah defend, with the army, the border of Lebanon. But the Government has been very sensible, the Sunnis, the Shiites and the government, work together to avoid the big problem in Lebanon. I think that now the situation will improve, after the events of Tripoli, last week, where the Lebanese army removed the jihadists from the city and Northern Lebanon.

Lebanese Christians were the only ones who, during conflicts, organized themselves into armed militias. What lessons does that hold for the current situations of Christians persecuted in the Middle East?
I don't think we should have militias. We learned from the past that this is not the way for peace. The way for peace is only through dialogue between the communities. Weapons and arms are not helping to get peace. That is why all Lebanese parties are now against militias in Lebanon.

Bishops have been almost unanimous in saying that they do not want a safe-haven or independent country for Christians in the Middle East. In your opinion, however, should other communities like the Kurds have their own state?
Apparently yes, there is a country for the Kurds, but as Christians we don't like to have a country for our people. We like to be with everybody, because we are the salt of the society and we like to be friends with everybody.

You were born in Syria… how has the civil war there affected you?
I still have family in Damascus. I am worried about the situation, but apparently Damascus and the big cities are now safer than three years ago, when the war started in Syria.

I call for the heads of state in Europe to stop sending arms to Syria and Iraq, to understand the problems better, to understand our way of democracy. We cannot have the European democracy. The Arabic world should start to think how they can have their own democracy, maybe in the near future we will find this way.

You said that it would be bad for the Christians if the regime fell in Syria. But do you see a future for Bashar al-Assad in power?
I would not like to see Daesh take the position of Assad. Assad, even with his faults, in Syria, is better than Daesh, Al-Nusra and other jihadists. At least we know that in his regime Christians are free to worship, to build churches, and the Government gave some land to help build their own monasteries and churches. I think that if we look between Syria and other Arabic countries, it is easier to live in Syria than other Arabic countries, except, of course, Lebanon.
Posted by Filipe d'Avillez at 18:43