"Everyone in Syria is at risk, not just one family" 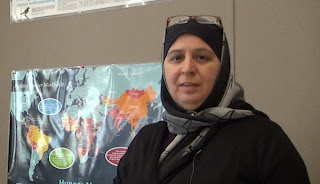 Full transcript of interview of Sawsan Jabri, who coordinates opposition to Bashar al-Assad in the Detroit area of Michigan. Story, in Portuguese, is here.

Could you tell us a little about your activities?
I am an active Syrian-American, trying to help the revolution in every possible means. Trying to organise events, spread the word about what is happening in Syria, contacting the activists inside, getting information from the ground to the media here.

You grew up in Syria?
Yes

In Syria were you already against te regime?
As a big family we were clearly affected by the regime. At the time there was no way to express that we were against the regime, because we would end up in a bad situation.

Syrian citizens at the time were classified. I was considered neutral, neither against nor with. This was the situation of most citizens at the time. If I applied for a job, it would be more difficult to get, I had to be better than the competition.

Have you been able to work as a doctor in the US?
I passed the exams, but since I got married and had children I have not been able to work here. I got a degree from the University of Michigan and started teaching.

Do you believe that toppling the regime is a solution for Syria?
For sure, 100%. It is long overdue. Assad should have been toppled a long time ago. I feel that it ruined the whole country. The economy, the general situation, even the natural resources. One of the countries that suffers most from desertification is Syria. It hurts me to see my country of birth going in to a natural crises, not only a humanitarian, medical and economic, of course there is no freedom of expression and this is even affecting the natural resources. Every possible way the country is affected by the regime.

Syria was always known as a country where minorities were protected. Some of the minorities are worried that if the regime falls they will be persecuted…
This is propaganda. Since the first week of the revolution the regime suddenly started talking about the sectarian issue. I think the regime is trying very hard to focus on this issue, the sectarian crisis and fear. We always lived with Christians, Alawite and Shiites and every possible sect in Syria, with no problems, so why are we suddenly afraid of sectarianism?

It is strange to me the emphasis on the fear of the minorities that the coming regime will have an impact on minorities. All the massacres that there have taken place have been against the majority, the Sunnis. I cannot remember any massacres or killing of Alawites or Christians… So there is no need to fear something that has not happened. They are talking about possibilities, but why are we worried about what might happen and not worried about what has really happened. There is evidence of massacres by Alawites against the majority, but there is no proof of massacres by Sunnis against any minority. It is strange propaganda and unfortunately people are buying it.

You are Sunni?
Yes.

But do you know of members of minorities who are also against the regime?
We have Christians and Alawites with the revolution, also Ismailis, Druze, from every group. This is Syria. Before talking about minorities let’s talk about Syria. I don’t care about people’s sect, all I care about is if they are Syrian.

So you believe that the regime was responsible for the chemical attack, and you think there should be an international response?
Absolutely, 100%. Since the day after the attack we have been in contact with the activists and confirmed it. Now the UN, USA, Europe, all are convinced it was the regime that committed the attack. There must be an international response against the Assad Regime, not against Syria, we want to differentiate between the two. This is not acceptable. It is the killing of 1500 people in one hour. It is a massacre in large scale and can happen again. If he did it once he can do it again. There must be a response against Assad.

Is your family still in Syria?
Yes.

Are you worried that your actions here could have repercussions on them back home?
Maybe, anything is possible. But we have to raise our voice. Everyone in Syria is at risk, not just one family, everyone is at risk because of Assad being in power.