“We hope the Pope puts his diplomatic machine to work 100%” 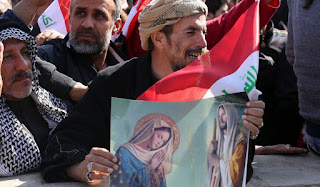 This is a full transcript, in the original English, of my interview with Metin Rhawi, from Suroyo TV and the European Syriac Union, regarding the importance of Pope Francis’ visit to Iraq. Excerpts of this interview were used here and here.

How important is this visit for the Christians in Iraq?

The Christians in Iraq, we have good knowledge about what they are thinking, and regarding this visit many people find it important, of course, because they belong to the Catholic Church, they are Chaldeans or Syriac Catholics, and that gives them a possibility to see their supreme leader in faith. But at the same time there are also clear voices from the same community who have reservations.

We know the situation of our people, the Christians in Iraq. We are out in the diaspora, we have lost everything, it is about existing or not in their homeland. Since Daesh no rights have been acknowledged. We are happy that they are talking a bit more about the Yazidis now, and also remembering that there were Christians who suffered very much, and so they are also mentioned, but we have lost properties, our land, our cities, our villages, our rights and there has also been a very bad influence in the civil society, with people thinking that they do not actually need the Christians, they are not part of the system, part of the culture, and also some voices from Muslim leaders asking why the Pope should come to Iraque, since he is an infidel.

Of course, Al-Khadimi and Barham Salih have expressed their gratitude and they are happy he is coming, they are doing their best and trying to show a good face, but both sides exist, in general, among the society, and also among the Christians. Some are very happy, but others are raising issues. We have been victims of genocide for over 100 years. The last big genocide was in 1915, prior to that, 1895 and then Daesh 2014. Nobody demanded acknowledgement or liability for what happened then and now. Rights do not exist. Nobody talks about the possibility of educating our children in our language, the right to be Christian and if we want to produce and consume alcohol it should not be a problem, but instead we see bombing of the stores that sell alcohol in Baghdad. So there are many rights that have been left out and it seems to those people that the Pope should ask about this situation before coming here and making sure that the rights should be acknowledged and given to the Christians, the Assyrians/Chaldeans/Syriacs, because it gives some kind of legitimacy to the Baghdad regime, as if they had been successful in dealing with this sort of thing. But obviously the Pope will be having diplomatic discussions with them, I believe.

But of course we know the Vatican has always had a very pragmatic approach to diplomacy, and have in fact been able to achieve successes and rights precisely through dialogue with regimes that are not always friendly, such as China.

Obviously, the Pope’s administration is very powerful and he is in a position that he can, indirectly, influence some foreign ministries. Obviously, the countries that are Catholic, and proud of it, listen to the Pope when he has something to say, we know that! That is why we, as the European Syriac Union have not expressed reservations about this visit. We think it is good, it is very important that he visit our homeland, because some of our people belong to his church, they are faithful to his church, and to him, and he should be asking about their rights. We hope that he will do that, we understand also that he is not a leader of a country who has an army to invade, or to impose sanctions, but we know that he has the capacity, when he wants to, to draw a line in the sand that should not be crossed. We hope that is his intention, because we see a lot of concern from the Pope and the cardinals and bishops around him have expressed this, that Christianity should not vanish from the Middle East, from Iraq. They are trying to do their best, but their strongest weapon is prayer... But we know that he has diplomacy and we believe that he will use it, of course.

I am trying to show you the full picture. There are people on the ground with both opinions. I know that in Baghdedi and Bartella for three months a choir has been practicing singing hymns in Italian and in Latin, as well as in Arabic and Syriac, to show that they are proud to be Assyrian/Syriac/Chaldean, they have their own language, but they belong to Iraq at the moment, they are Iraqi and they are also Catholics.

Disunity has always been a problem for Christians in the Middle East. Following the persecution by the Islamic State, has the situation improved?

If you look internally, when it comes to Christianity, the persecution woke us up from this strange dream that we are different empires living on the ground. In fact we are hospitalised on the ground, we are close to dying on the ground, but still the church leaders are not trying to find us a common line on the ground for Iraq. The Patriarchs and leaders of the different churches should cooperate much more. They are all Christian, but they have the same roots, they are the same people, there is no doubt that they are the same community, but they are divided in different "isms", when it comes to faith some are Catholics, some are Orthodox. They should have done much more.

Watching the political leaders, I can see that they are trying, but the ones who have more power, with seats in Parliament, consider that they are big enough to decline any interest that does not benefit them directly, they are not thinking as a community, but rather as parties. We are still divided, unfortunately, in that sense. It is tough to say that, it hurts, but it is the reality.

There are many reasons for the Pope not to visit at the moment. A recent bombing in Baghdad, the pandemic… The Pope has personally insisted on going. In your opinion is he being foolish, brave, or both?

We have seen in the news that even the previous Pope has expressed his fear and called upon Pope Francis to be careful and maybe not visit because of the security, and the Pandemic. I think that the Pope is not stupid, he is not foolish. He is doing a very good thing to show that he is with his people and that he has interests in Iraq because of the people and because the societies in the Middle East are based on faith and religion and he is a leader that mush show that he is close to his people. And he is doing that and we should really give him credit for that.

We hope he will get home safe and secure, and I think that will be arranged, I am not worried that something might happen to him. His faithful love him, and they won't get too close because of Covid. I think all this will be respected, and he knows how much this means to his people, because even if some say he should not visit before rights are guaranteed, there is a part of the community that is really insisting, and rightly so, that he is showing courage and showing that he is with them, that he knows that they exist there and that nobody should be able to force them out. So much so that he is even willing to visit them himself. It is an act of being with his people, and that is good, and we should give him credit.

But of course, above all, we really hope he will run his diplomacy machine to work 100%, because it is a very critical situation, in Iraq and in the Middle East in general.

In Iraq there are about 300 thousand Christians from different churches, of the Chaldean/Assyrian/Syriac people today. So, from being about 4 million 20 years ago, maybe more, to 1.8 million in 2003, or 1.5, according to the figures, now people say 200 thousand, others say 300 thousand, so we can see that it is like 10% left. We are not far away, in time, it could be in our lifetimes... This is frightening, and we need to be awake and I think the Pope is acting on that.