Thoughts on the Alfie Evans case 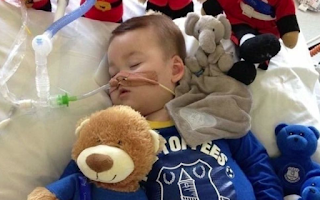 A few thoughts on this case which many of us have been following closely.

#1 – Aflie is not Charlie
Despite many comparisons, Alfie’s case is not the same as Charlie Gard’s, the similarities notwithstanding.

The main difference is that Charlie was, according to his doctors, suffering and in pain. The cause of his pain was not so much his disease, as the invasive medical equipment which was keeping him alive. In short, the cost of keeping Charlie alive was to keep him in pain and in suffering.

Charlie’s parents had their hopes set on treatment in America. But when the actual facts came out, it turned out that the treatment they had been offered was a farce. There was no indication it would help him in any way, it had never even been tested on mice and there was not even any guarantee that it wouldn’t make him worse.

Alfie, on the other hand, does not seem to be in pain, at least that is not what the hospital and courts have been saying, so far as I can make out. The problem does not seem to be that he will suffer if kept alive, the problem – again, as far as I can make out based on the press – is that doctors and judge consider that to keep him alive is futile. This is a not so subtle way of saying that his life is not worth living.

Alfie’s parents do not have their hopes set on some maverick doctor providing a miracle treatment, they just want him to live as long as he can, cared for and as comfortable as possible. They understand that he will not live as long as a healthy little boy, but they refuse to accept that this means he is not worth being cared for. The way his life has moved countless people would seem to prove beyond doubt that even a life that is materially unproductive is not futile.

#2 – The doctors are not psychopaths
A lot of the rhetoric from people defending Alfie and his parents is disturbing. I don’t believe the doctors have anything but Alfie’s best interest at heart. Of course, that does not mean that their idea of his best interest coincides with mine or is even correct.

This happened with Charlie Gard as well. Some of the things said about the health professionals was absolutely disgraceful. In that case I had a personal stake in the issue, since at the age of 10 I was admitted to Great Ormond Street and was treated with spectacular care and attention. I have nothing but the warmest memories. I have no personal connection to Alder Hey, but find it unlikely that its staff is composed of zombies and cold blooded killers. The hateful rhetoric helps no one.

However, that being said, there are some disturbing indications coming out from Alder Hey. In my experience doctors already have a natural tendency towards arrogance, especially when dealing with people who have little or no medical knowledge.

One paragraph struck me in the Guardian’s coverage of the hearing on Tuesday. “The clinician, who cannot be named but who was one of the team treating Alfie on Monday night, said the hostile atmosphere had created a ‘genuine fear’ among fellow doctors and that there would have to be ‘a sea change’ in their relationship with the family before they could consider letting him go home.”

What?! This sounds a lot like “hey, change your attitude and then maybe we will think of lending you this little boy you say is your son, but who is actually our property”. Are they mad?

This arrogance seems to confirm what we, outside Britain, hear about State and health worker’s attitudes towards families. I know of several non-British residents in London who will avoid taking their children to hospital at all costs, for fear of raising suspicions of abuse. Even if this is an exaggeration, the fact that people feel that way is in itself cause for alarm.

#3 – Whose children are they?
The crucial question here is, does the State have the right to override parents decisions regarding their own children? In short, yes, it does. If it did not, then there would be no safeguards against child abuse. You can’t get your five year old drunk on Vodka every two days and say you’re his dad so that’s ok.

However, if there is any situation in which the state should exercise its power in the most conservative way possible, it’s this one. A parent’s connection to his child is a sacred bond, it should not be severed lightly.

So yes, it is possible for a judge to rule against the parents in a case like this, but that doesn’t mean that the state is always right in doing so. When the state is wrong in these cases, it is oh so very, very, very wrong, and the injustices caused should make all involved shudder. 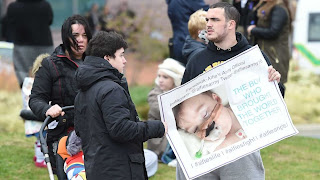 #4 – The people are rebelling…
Regardless of who is in the right in this or that particular case, there can be no doubt that we are heading down a path where life is seen, more and more, through the lens of utility rather than inherent value.

Euthanasia, which is gaining ground in so many countries despite the alarming signs coming out of Belgium and Holland, is another way of saying that our life loses value when we cease to be productive and that dignity is something we define ourselves, rather than being inherent.

So it is not surprising that doctors, judges and others will increasingly begin to look at cases like Alfie’s and just think “why bother?” It may not be about money, although that can be a worrying factor, it’s just about not seeing the point.

And this is not exclusive to Britain. Friends of mine who have a child with a rare cognitive and physical condition which essentially renders him completely dependent, have spoken about their despair at going to the hospital and feeling, even if it wasn’t said out loud, that the doctors didn’t understand why they didn’t just let their child die.

So it is interesting to see – and probably shocking for many – that in cases like Alfie’s, where the parents fight back, people are backing them up. They are taking to the streets, they are organizing prayer vigils, they are protesting on social media. Maybe not always in the best way, maybe not in the best terms, but they are rebelling.

The de-dignification of human life runs counter to what we are. We know, deep down, that we are more than what we produce, than what we feel, than the pleasure we enjoy or the suffering we endure. When we see an old and ill person saying they just want it all to end, then maybe we keep silent out of supposed respect for their autonomy, but when we see a man climbing on to a ledge our instinct is still to talk him back down and when we see doctors saying, or seemingly saying, that a baby’s life is not worth the effort, we lash out.

Let this be a warning. Let those who make our laws and policies take heed. Let their arrogance not be their undoing.