"The brutality of the regime in Syria is not defendable anymore" 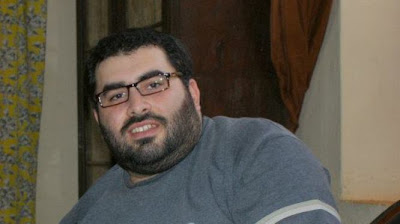 Full transcript of interview with Syrian Christian Fadi Halisso. Fadi is studying in Beirut to become a Jesuit priest. He is a rare example of a Christian who has been opposed to the regime since the first protests back in March 2011. News item in Portuguese available here.

How do you manage to get information from Syria?
It is not easy, we have some connections with people who have secure internet connections. But like when three days ago there was a complete blackout in Syria, we were not able to have any kind of information because even those who have satellite uplinks had to turn them off for security reasons, so it is not easy, we are hardly getting information because even activists are being followed by security forces. We are managing, but the fear is to have a blackout for more than two or three days, in this situation we won’t be able to know what is happening there.

We get information from the Regime and from the opposition. Is it trustworthy?
They are both not reliable, they both use lies, but not on the same level. The opposition are not always telling the truth about the situation in the field and how the battles are going. Sometimes they are not showing their troops’ inhumane behaviour. But of course if we compare this to the Government information, it would be more reliable. The government lies in every word they say. They are bombarding and shelling cities and even people in lines in front of bakeries, but you don’t hear about this in the news from the media.

Did your position change over time or have you always been against the regime?
My position did not change, from the first month of the revolution I was on the side of the people and their demands for liberty and dignity. In the beginning it was very peaceful and many of my friends were killed in the streets during the peaceful demonstrations, and others were detained for many months, so my position has been always the same. Now I am admitting that the violence that ensued is not a positive side of the revolution.

How about the position of Christians in general, the idea we have is that they are mainly in favour of the regime, has this changed?
As for the Christians in general there have been some changes. Many of them are involved in relief efforts taking place in many cities. Many of them who cannot support the regime anymore decided to leave the country. Did you hear about the defection of Jihad Makdissi, the speaker of the Ministry of Foreign Affairs? He defected to London via Beirut. So yes, the Christians now, many of them at least, are considering new positions in the struggle taking place. The brutality of the regime is not defendable anymore. They either choose to be silent, to leave the country or to be involved in the relief. Many of the Christians who came to Beirut, to Cairo or to Jordan are very active in the relief and support of their countrymen inside Syria.

Have there been any instances of Christians fighting in militias for the Government?
There have been some talks about this, but what I know for sure is that some people in the Government wanted to offer the bishops weapons for their parishes, but they refused both in Alepo and in Damascus. They refused to carry weapons to defend themselves, but they opened their institutions to receive displaced families. But at the same time some Christians individually chose to carry arms and fight with the Government militias.

Isn’t there the danger of Syria getting dragged into an ethnic war like what happened in Iraq?
There are always fears about repeating what happened in Iraq in Syria. But at the moment nobody is willing to take revenge of other parties. But some extreme currents in Arab Gulf countries are trying to force their agendas on the Brigades they are financing, and some of those agendas have nothing to do with the Syrian cause. Some of them are forcing extremist religious practices in the areas they are controlling, which have nothing to do with the moderate Islam we have in Syria. That is our main fear, we don’t fear an ethnic war or a religious war in Syria. At the moment we can see it is under control even though there are some individual incidents here and there.

What is the situation of the refugees there in Lebanon?
In general the refugees in Lebanon are in a better situation than those in Jordan. In Jordan three babies died last week of hypothermia. In Lebanon the situation is better but the needs are very big. Of course if you compare it to the needs in Syria it is nothing. People here at least have shelters to sleep in, many people in Syria are in the streets, fighting the winter without any help. Here in Lebanon we try to organize small initiatives, we try to cooperate with the local community, many Lebanese NGO’s are helping us immensely. The problem is that the number of refugees tripled over the summer. Now more people are coming because of the military action taking place in Daryah, or in the suburbs of Damascus. Each day we are receiving families that have to be sheltered. Here in Lebanon we don’t have collective facilities to host refugees, they are forced to look for apartments, small rooms or even garages to rent.

What is the attitude of Lebanese Christians towards the Syrian Christians in need?
It depends. Mostly the people who lived during the Lebanese war have hard feelings against Syrians, because of what they suffered from the Syrian regime’s troops in Lebanon, so they are not willing to cooperate. But the younger generations who did not have that experience are very helpful, they donate things and help the children, teaching them, collecting donations. We cannot generalize the Lebanese Christians. There are many people of good will and there are others who don’t want anything to do with Syrians.

With all the atrocities that we have heard about, how come the Government still has such a strong army, how have there not been more defections?
Many of the soldiers come from deprived environments in Syria. They are very poor, if they defect they don’t have anywhere to go. Defection is not an easy decision, because you are not only putting yourself in danger, you are placing your whole family in danger. Those who do defect, especially from higher ranks, only do so when they manage to secure their entire family, and this is not always easy. The lower ranks are hopeless, they don’t know what to do, to stay in the army and kill their relatives, or defect and become a target themselves. It is not an easy decision and it is not an easy thing to ask for.

Other interviews concerning Christians in Syria
Interview with Syrian Christians for Democracy
Jesuit in Syria: "I am leaving the country in the next few days, by decision of the Church"
“The end is near for Bashar”, but “Free Syrian Army are gangsters”
Posted by Filipe d'Avillez at 16:14