“The end is near for Bashar”, but “Free Syrian Army are gangsters” 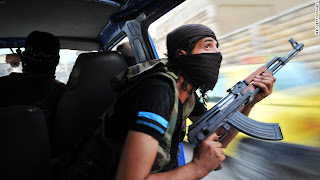 Full transcript of the interview with Alfred, a Syrian Latin Rite Catholic who worked in the Cement industry and escaped from Aleppo to Beirute when the fighting started. News item (in Portuguese) here.

Why and when did you leave Aleppo?
Before the fighting started in Aleppo we started going back and forth to Beirut. The last two weeks were the most dangerous in Aleppo, so everybody left

What do you believe is going to happen in Syria?
As you know, the first thing that happened was that most Christians who were well off left the country. The ones who were not well off stayed in their houses, I am calling everyday to know about the community. Nobody knows about the future, about the regime. It’s all politics, and deals under the table.

In your case, personally, would you like the regime to be replaced?
For the Christian’s sake the regime is better as it protects minorities. That is what the Christians want, for the time being. But for the long term everybody needs some changes. Nobody believes in the reforms anymore, in all these promises that have led to nothing. We have been waiting for 12 years, nothing really happened for the people. Maybe the country improved a bit, but everything is in the hands of the minorities and a circle around the president.

Do you believe that if the opposition take over they will protect the Christians?
The opposition that you see on TV, they are gangsters. The Free Army, I don’t know what their purpose is, just the fall of the regime. They steel, ask for ransoms. Just two days ago they attacked one of the Christian clubs in Aleppo, they swam in the swimming pool and destroyed all the alcohol, then they wrote on the wall, “try and drink alcohol again, and you’ll see what will happen”. You are seeing some radical Islamic groups coming with this free army, it’s a mixture of everything.

Do you know any Christians who were active in the conflict? Either for or against the regime?
No. Christians are not participating, they are not taking any position. They have no interest. Everybody knows that if they join the opposition or the militias, their punishment will be death. The others think that if they are martyred they will go to heaven, that is why they are going. But Christians, they have brains, they have families, they don’t do these things.

You also do not see Alawites going to the Free Army. The minorities are not taking any position. But there are Christians who are part of the regular army, I have cousins and others who are in the Syrian army.

They don’t think of deserting?
No, that is not the case. When you hear about the big names of deserters, these are people who are bought. Like the prime-minister, this guy has been paid something and deserted, it is very obvious. 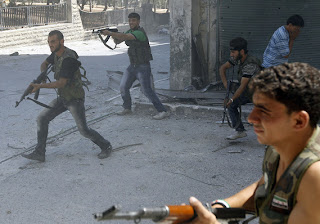 Have you been well received by the Lebanese Christians?
Most of the Syrians who have come here have a second house in Beirut, the others are renting houses. I personally purchased an apartment last year, before the problems. But people who arrived just now are not buying, because it is not time to spend money, everybody is putting money on the side.

But in terms of solidarity and friendship, have the Christians in Lebanon received the Christians from Syria as well as they should?
I don’t personally know any contacts between Christians from here and from there. The ones who came here are well off, they pay their own expenses, there is no evacuation for the time being. The other Christians from Aleppo stayed in Aleppo, because they can’t leave. The roads are cut off, it’s impossible to travel on the highway, and the flights are fully booked for the next month. The people have to wait two, three, four weeks on waiting lists to get on a plane.

I’ll give you an example, taking a taxi from town to the airport should cost maximum 10 dollars. Today, the taxi will charge 200 dollars to take you to the airport. Who can pay this kind of money? And then catching a plane to Beirut or to Damascus… and living in Beirut is expensive compared to Syria. That is why Christians are staying in their homes, most of them.

People who were in Beirut have told me that there have not been many contacts between Christians in Lebanon and Syria, some even complain of a cold reception.
Sure. Here they are Maronite, and there is no connection between the churches. In Syria we have 13 bishops, and there is no coordination between them. I know some of them personally, they are not coordinating. Each one is taking care of his own community. I went to my Bishop about 8 or 9 months ago, and I asked him why they didn’t complain to the Government, and speak of the demands of the Christians? Why didn’t they ask for our rights? Then the problems happened and one day the revolution started, then it was too late to ask about reforms, nobody asked about the reforms.

But even among the different Catholic bishops?
I don’t believe it, because everybody has a big community to satisfy, and they are not even able to satisfy their community. The financial situation of the churches is very poor. My church has about 20 thousand dollars a year to distribute to the poor families, and each family gets about 20 dollars a month. This is all they can do.

Do you think you will be returning to Syria?
Returning is obvious for us. We can’t live in another country. We love our country, but in this situation everything is on hold, until this fight ends. Now the army has entered Aleppo by land and we have been promised that they are trying to clean everything in one or two weeks maximum. This is what I heard, but I don’t know if this will end or not. Like in Damascus, the fourth division entered the city and they cleaned everything.

But you have insurgents from outside. I have a friend who was kidnapped last week with four other Christians, and he told me there were black people, people from Libya, from other countries… There is a mixture, they ask for money, they are gangsters. He said they saw weapons that they’d never seen in their lives.

The king of Jordan said that Assad might try and set up an Alawite enclave if he feels he can’t hold onto power. Could that happen?
No. They will not try to divide Syria. The president’s duty is to maintain whatever he can until he leaves, but of course the end is near. He will not survive. The American’s, Europeans, 80% of the world is against him. And now with these problems, and the hatred in people in Syria…

My opinion, if there is an election, I don’t know if he would even run. He’s fed up with this. If I were him I would ask for political exile, but I don’t know if he will. Everybody is defecting around him, his best friend Tlass defected. Then there was the explosion in Damascus. Nobody is around him now, nobody knows who is ruling the country now. It’s “run for your life”. If you are kidnapped it is better to pay the ransom than to ask the Government for help, because nobody will come. They are sometimes part of the corruption, the gangsters, you don’t know if the police are involved. Its chaos, it can’t get worse.

You have access to western news outlets. Do you think they are portraying the truth on the ground?
No. There are some exaggerations. I hear people from the States going to Aljazeera and asking how they can give money to the Free Army to buy weapons. This is not a civilized way. They are destroying the country. Maybe supporting Democracy and sitting around a table, this would be more civilized, but the embargoes, they are killing the country. Business has stopped, we are going backwards. We didn’t see any support from the west, food or humanitarian aid, nothing happened. The politicians just go on TV and pretend to do something good, but they are not cooperating at all with Syria.
Posted by Filipe d'Avillez at 14:38