ISIS destroyed the harmony of the society in Nineveh 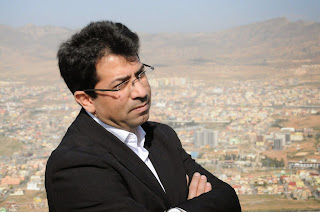 This is a full transcript, in the original English, of my conversation with Yezidi activist Mirza Dinnayi. It was recorded on the 14th of March and used for a series of articles published a few days before the liberation of Mosul.

When Mosul is liberated, we can expect the situation between Kurdistan and Baghdad to come to the surface. Do you believe that it could turn into an armed conflict?
There are many conflicts that can happen after the liberation of Mosul. One of them that you mentioned is the conflict between the KRG and the central government about the future of the disputed area.

But what we saw in the last weeks also, because of the Turkish factor and pressure from Turkey, was a conflict between PKK and KDP which is also a very dangerous conflict which is taking place in Sinjar area. Just today some PKK civilian sympathizers, Yezidi people, were demonstrating in Sinjar and a 16 year old was killed by Peshmerga forces from KDP and about 20 people were injured. Two weeks ago, or one week ago, there was also a conflict between Rojava militia, which is supported by Turkey and KDP and PKK forces, and there were also more than 20 injured and at least four people were killed.

So the problem is that we have, in these disputed areas, two types of conflict. One is between KRG and the central government, about the future administration of this region, and the second is an inter-Kurdish conflict, with influence of Turkey and Iran. Some Kurdish forces are supported by Turkey and others are supported by Iran and they are fighting each other. This is more dangerous than the conflict between Iraq and Kurdistan.

I have read reports on heavy presence of PKK militants in and around Sinjar, and that many of these are actually Yezidi members of PKK. Is it true that there is a big presence of Yezidis in PKK?
The sympathy is more directly to the YBS [Sinjar Protection Units] and YPG, more than being members, there are actually very few members, among Iraqi Yezidis there are no members of the PKK, but we have members of these YPG or YBS militias, which are also armed forces, but supported by the Iraqi Government, and they have some relations with the PKK, but they are not direct members of the PKK because PKK is a forbidden organization in Iraq and Turkey, but also in Europe. 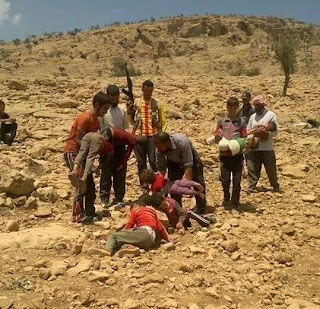 So these are people who have some sympathy for PKK, and one of the reasons why they joined YPG or YBS is because they were the ones who, in 2014, liberated more than 150 thousand Yezidis from the Mountain when ISIS attacked the Yezidis. At that time the Peshmerga forces collapsed, the Iraqi forces collapsed, and these people came and saved the lives of tens of thousands of Yezidis who were surrounded in the mountain, without food or water. So this is one of the reasons some of the people in the area have some sympathies for these forces and joined them.

We also have armed force which belongs to the Iraqi Hash al-Shabi Forces [Popular Mobilization Forces] who are Yezidis from one side, and which also have some relations with YPG or YBS. The problem is that KDP said that Sinjar should belong to them, and the Peshmerga say that these groups do not belong to the Peshmerga and they are not legal groups, so they should leave. But the problem is that these people are from Sinjar, not from outside. This is a problem that we have and we have tried to solve this conflict in a peaceful way, but unfortunately it has not been possible.

The Kurds seem set on independence. What is your position on this?
There is a wish for independence among the Kurdish people, we support this wish, but we think that these problems, especially in the disputed areas, because most of the Yezidi people and the minorities, Yezidi and Christian, in Iraq, are living in these disputed areas and we think the only way to declare independence is if it is peaceful, because a war will damage our community.

The Yezidis have some demands from Iraq and from Kurdistan, and our demands are to have some special autonomous areas, self-administered autonomous areas, for Yezidis, a province in Sinjar and Nineveh Plain, and these areas should be in cooperation between Bagdad and Kurdistan. This is the wish of the Yezidi people. Because there has been no referendum, we don't know what the people will decide, we think that it is the best way to find what the Yezidi people want. I think the Yezidis will agree, but not without conditions.

If Kurdistan does become independent, and an autonomous region for minorities were to be created, should it be linked to Bagdad or to Erbil?
After all the problems that we had, after the genocide, I think it is the full right of the Yezidis and the Christians to have some demands in order to be part of Kurdistan or not. This is the position of the Yezidis at the moment. Most of the Yezidis would like to be in Kurdistan, because we don't think that we have a future with Mosul, we think there is no future between Yezidis and Mosul, because all the attacks were planned in Mosul, Yezidis were sexually enslaved in Mosul by Sunni Arabs, so there is no way in the next generation to be integrated so smoothly with Mosul, but with the Kurds we have the same roots, we have ethnical roots, so it could be. But we have to have a democratic background and to save the lives and the future of Yezidi existence, their political and social entity, I don't think the Yezidis will agree without conditions.

When you speak of an autonomous region, you would be living side by side with other minorities, such as Christians, Shabaks, Turkmen, etc. Is this what the Yezidis want as well?
Yes, this is the idea, that all the minorities live together in peace. 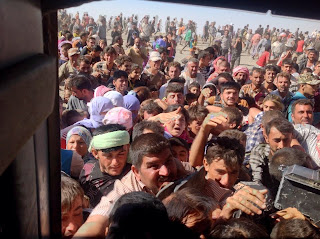 The Kurds reserve places in their parliament for ethnic minorities, but this does not include Yezidis. They say Yezidis are Kurds with a different religion. What is your opinion on this?
The Yezidis are not united about this issue. Some of them say we are an independent nation, some say we are Kurds, and some say we are an ethno-religious entity and that this ethno-religious entity should be respected. So we have three versions, and my opinion is that the identity of the Yezidis has been established now as an identity after genocide, so the feeling of the Yezidis before and after 2014 is different. The politicians in Iraq and Kurdistan didn't realize this until now, unfortunately, but they should recognize it.

Christians seem very divided in this region, with more than a dozen political parties and at least six militias. The Kurds are also quite divided, although all seem to agree on independence. Does this problem affect the Yezidis as well?
Unfortunately yes.

The community is divided because of the genocide and the massacres, and the genocide has not stopped yet. So my community is also divided in membership among different parties. We have Yezidis who belong to the PKK, Yezidis who belong to the KDP, PUK, independent Yezidis, some small Yezidi parties which were useless in the last two years. Now the elections will come and there will be new political identities of Yezidis, so I think my community is also very divided, maybe not as badly as our Christian brothers, but also divided.

I see you used the term Christian brothers. If there is this autonomous region you would be living as brothers with the Christians, Shabaks, Turkmen... Are relations between Yezidis and Christians and these other minorities brotherly, would it be easy to live in this autonomous region in peace?
I think that between Yezidis and Christians there is no problem. With the Shabak Shias we have no problem. The Shabak Sunnis, unfortunately, joined ISIS. The Shabak themselves are divided. And for Turkmen it is also very difficult because we have Turkmen Shias and Turkmen Sunnis and these aggressively joined ISIS, and they were members and they attacked Yezidis, but we have very good relations with the Turkmen Shia, so you will find that the minorities are even divided among themselves and that ISIS destroyed the harmony of the societies, but in my opinion Yezidi, Christians, Shabak Shias and Turkmen Shia can understand each other. Any relationship with Sunni Muslims, because of ISIS, cannot be included in such projects, in my opinion. 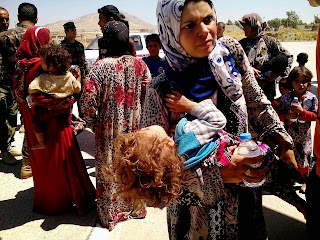 For the creation of an autonomous region you would need support and allies. Bagdad and/or Erbil, but also international allies. Do you have allies for this plan at the moment?
Unfortunately we are trying to lobby at the European Union level and at the American level. Everybody, from the UN or different Western countries, they tell us that we are right, that we need an autonomous area, but everybody is asking us who will pay for it. And this is a problem which we have now. We have some solidarity from the Western countries, but nobody is ready, until now to establish a project... I think the international community as a whole is responsible for this.
Posted by Filipe d'Avillez at 19:12