Sex abuse and safeguarding in England and Wales: "Your model is only ever as good as its weakest element" 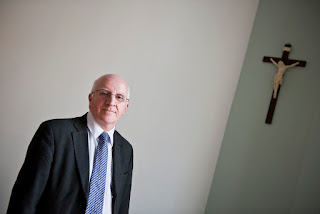 This is a full transcript, in the original English, of my interview with Danny Sullivan, former chairman of the National Catholic Safeguarding Commission in England. The article, in Portuguese, can be read here.

Since these scandals erupted, around the turn of the century, what was the biggest scandal in England?
The biggest scandal, which is reflected in the Public Inquiry, which is taking place, is the evidence of cover up by religious leaders and others, not listening to victims and survivors, and putting the reputation of the church before the rights and the needs of victims and survivors.

Is the situation very different between religious orders and the dioceses?
I think one of the biggest scandals, and it doesn't look as if this meeting is going to tackle it, is the dual system of reporting to Rome, between diocese and religious orders. Nobody seems to be calling religious order leaders to account.

For example, when the English and Welsh bishops went to the ad limina meeting in Rome, they made a statement that every bishop would offer to meet with any victim or survivor. Nothing was said about leaders of religious orders. They have not made the same offer, as a group, so if you are a survivor or a victim of a religious order you suffer even more.

From what I could find, there are guidelines dating back to 1994, but the Nolan report is from 2001. What guidelines are in place now?
There was the Nolan Report in 2001 and then in 2007 baroness Cumberlidge, a member of the House of Lords, reviewed safeguarding in the Catholic Church in England and Wales, around five or six years after the Nolan Report. It was she who proposed setting up an independent safeguarding board, always to be chaired by a lay person, and independent of the bishops. That board then had an operational arm - The Catholic Safeguarding Advisory Service - and the responsibility of that service was in setting up guidelines for safeguarding, auditing, inspecting safeguarding in dioceses and religious orders. So this all happened post-2007, and then they have constantly been looked at and reviewed.

The board you mention, is that the National Catholic Safeguarding Commission?
Yes. I chaired it for just over three years.

What would you highlight about the guidelines? In what fields have they made more of a difference?
I think they made a positive difference in that ostensibly all the bishops signed up to them. And then, following that, we persuaded almost all the religious orders to sign up to diocesan safeguarding structures, which they had to pay for, rather than being independent. If any religious order wanted to have their own safeguarding commission - and the Jesuits did - that was ok, so long as they subjected themselves to national guidelines and inspection. The Jesuits actually have a very good safeguarding commission. That is the positive side.

The negative side is that you still, on occasions, come up against the autonomy of the bishop. I had a bishop who ignored the national guidelines for how you appoint a safeguarding coordinator. I had an archbishop and a bishop who refused to meet with victims of abuse to apologise to them because their lawyers said they shouldn't.

Is reporting mandatory? Do you think it should be?
It is not mandatory by law. I always said, when I was chair, that I would unreservedly support it being the law. But in fact when we produced our guidelines we made it mandatory that if anybody came forward with an allegation then the appropriate services - police, social services - should be informed immediately.

Was there much communication between the Church in England and other English speaking churches?
These guidelines were produced. The Vatican liked them and recommended them to other bishops’ conferences around the world. Every year there is what is called and anglophone conference in Rome, on safeguarding, for English speaking bishops conferences. You would have people there from the African continent, from India, all kinds of countries where English was a major language spoken. We had representatives from Chile, because they just found it a supportive conference to go to, even though their main language was not English.

I think there was influence in that direction, that countries which were English speaking were able to look at our guidelines and see how helpful they might be.

And when I was chair I was certainly aware of what was happening in Germany, Australia, and I would be looking at what other countries were doing in relation to guidelines. You can always learn good practice from others. It is a bit of a two-way process.

I think also some countries bishops don't believe they have a problem, they think it is a western problem. I remember in one of these conferences an African archbishop saying "we don't have this problem in Africa, our problem is priests who have children", and Father Hans Zoller, from the Vatican commission on safeguarding said "you don't have this problem because you don't recognise it. When you do recognise it you will need our help and you will need our support".

I am under the impression that England and Wales had gone from a dreadful situation – especially at Catholic boarding schools, apparently – to becoming a model institution in terms of child safety. Is that correct?
The guidelines are a good model.

If you spoke to some of the victims and survivors, like that group I mentioned who were victims of the Comboni religious order, they would say what good are guidelines if the religious leaders ignore them? If they won't even meet us? If they won't engage with us? The only way the comboni order will meet a victim or survivor is in court. They won't meet them, they won't apologise, so while that scandal still exists I would be very weary of saying that England has a good model of anything, because your model is only as good as your weakest element, and we have some very weak elements still, in England and Wales.

I took two survivors to meet with Pope Francis in July 2014 and I compared with what he said in his mass to victims and survivors from England, Germany and Ireland with what the leader of the Comboni order in England said. Did he apologise? No! He attacked me. How dare I criticise him. It’s all right for Pope Francis, he doesn't have the responsibility, the leader of the religious order does. It was unbelievable.

When you say "he attacked me" you mean the head of the Comboni order in England?
Yes. The Observer did a two-page story on the victims of the Combonis, and I was appalled at the lack of pastoral sensitivity in the quotes of the leader of the order in this country. I wrote a letter to the Observer, which they published, comparing his comments to what Pope Francis had said to the victims at mass, in Rome.

At that mass, in his homily, for the first time... I had never heard any bishop, archbishop or cardinal say this, Pope Francis actually identified the lived experience of victims of abuse in front of the victims. And he named that lived experience as suicide, alcohol addiction, drug addiction, inability to either make or sustain relationships and marginalisation from the Church.

I was sitting with a victim I had brought over who had started a charity to help victims of abuse, and he is quite a hardened person. And he was in tears. He said "nobody in that position in the church has ever named our experience like this".

In terms of new cases, have the guidelines made a difference? Are there fewer new cases at the moment because of them?
One of the unique things the Church in England and Wales has been doing, long before my time, is have an annual report, and every diocese and religious order is required to provide data, so we can monitor the number of allegations and priests and religious who are suspended. When I was chair we had a 10-year review of those statistics, which showed that over 50 priests had been removed from the priesthood. I don't recall, in my time, seeing the number of allegations falling in any significant way. But that might be a healthy sign, since there are good guidelines, victims and survivors feel confident enough to come forward and make the allegations.

Are children safer in the Church now than they were 20 or 30 years ago?
I think minors will only ever be safe in the Church when it is recognised that abuse is linked directly to the abuse of power and when those in power who abuse or who cover up abuse are speedily and effectively dealt with by the criminal systems of their countries and by the Church. Until lay people become sharers in decision making in the Church then a clerical elite will continue to make the rules and decide how to follow them.

If you think that exaggerated then consider:
The CDF has a backlog of almost 2000 abuse cases.
It has only recently increased the number of Canon Lawyers working on them.
It still refuses to respond to victims of abuse who contact it but happily responds to Bishops or indeed even perpetrators. You may recall that Cardinal Mueller when in charge of the CDF and asked why he should write to victims responded by saying it was their Bishops responsibility to do that not his. Shocking!