“The rebels brought the war into people’s houses. That is their strategy!” 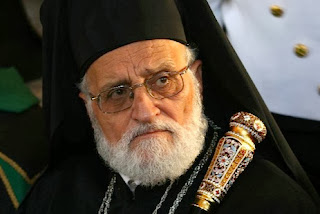 This is a full transcript, in the original English, of my recent interview with His Beatitude Patriarch Gregory III of the Melkite Church. The news reports, in Portuguese are here and here.

You were telling me that the other day on your trip to Lebanon there were only four checkpoints, whereas before there would be 12. Is the situation in Syria improving?
The first big tragedy was in Homs. Now it is peaceful in Homs and the people have returned there. They are reconstructing their churches in Homs, in Yabroud, in Qusayr, in Nabek. This is positive.

Around Damascus there are still battles. My home town Darayya has now been liberated, but was totally destroyed, including two churches and all our people's houses.

Maaloula also has been liberated and the people, most of them, returned. We have about 125 or 130 families back and we are building for them not the whole house, but one room per family, which means that they can be at home even in a small place, without having to pay rent.

Damascus itself was always peaceful, but you had daily rocket attacks, sometimes hundreds of rockets per day, killing, destroying, it depends. But despite that, life goes on.

Just today [21st of October], we had rockets and our Cathedral was hit. Not much damage, just a little. This was the fifth time our Patriarchate in Damascus was hit by a bomb, but despite this we remain.

Now the big problem is in the North of Syria and in Aleppo, which means the border to Turkey and Iraq and to Jordan are closed now. This tells you where the belligerants are coming from, from Jordan, Turkey, Iraq, but because Iraq is weak now, and not under the control of the Government. This geographical description shows us how the war is. The war is against Syria, in Syria. The Holy Father said there is a third world war going on.

Now the worst problem is in Aleppo. We had a meeting of bishops of Aleppo, we wanted to have it in Aleppo, but because of the situation we were obliged to have it in Damascus. They told us that there used to be four million people in Aleppo and now there are one million. The others are displaced, not necessarily outside of Syria. There were 150 thousand Christians in Aleppo, but now there are maybe 30 thousand.

All the churches of the different communities are destroyed, more or less. The people are in need of food, light, water... But they are still there.

Around Damascus there are belligerants, but the army is advancing slowly.

Now our problem is really how to get people to stay at home. Emigration is the biggest danger for the Church in the Middle East, not only in Syria. Syria, Lebanon are all under this influence, even Jordan. In Iraq, from around 1 million, or perhaps 800 thousand, the Christian population is only around 350 thousand now. In all of Syria, 55 thousand Christians displaced, inside or outside Syria, 50% of doctors are out. This is hemmorhaging of the Syrian society, Christians and Muslims alike.

The future of Syria is very problematic. You have around three million children without schools, these are the clients for ISIS in the future. That is why we are very keen to work for the children in Syria, in the schools, and to rebuild schools. My own school was destroyed, two thousand children were left with nowhere to go. Everything was stolen.

This is a very big tragedy, but in spite of this we have so much hope. You can't believe how the people are crowded in the churches, especially for Lent. Every day our churches are full. We have youth movements; our congregations, women, men, young people, are filling our churches with social and pastoral activities. I don't understand how the people react this way. Inspite of the fear and the imigration, this is a complex situation of hope, of power, generosity, fidelity, trust in the Lord and in the future.

Obviously the whole world is watching Aleppo and there have been many accusations against Russia and the regime because of the bombings. People are calling for a ceasefire...
First of all, the Church is for reconciliation. Already I wrote a letter in 2013 saying that the only way for the future of Syria and the church is reconciliation. So we are apostles for reconciliation, for peace, for dialogue, for reconciliaiton inside the society, not only for belligerants. This is our situation, our position.

So this is the real situation and position of the Church, rather of the Churches! We have three Patriarchs in Damascus. Greek Orthodox, Syrian Orthodox and myself, and several bishops in Syria. All of them have a common vision regarding the situation, the government, the complot of this war, and so on.

For example, Darayya, which now has been liberated but is destroyed, before the destruction the people were happy, working, developed, and everything. A rebel group entered and made life impossible. They subdued the civilians; the civilians were under their control. Who has the responsibility to save these people? Who is responsible for the citizens? If the rebels are taking my house, who will kick them out?

The same happened with churches. When the belligerants came to Homs, in the midst of the Old City of Homs, where the churches are, they turned the churches into their strongholds... What to do? So you can say that most of the churches were destroyed by the government. But why? Because they were no longer used as churches!

For example, the very famous monastery of St. Bachus and Sergius, in Maaloula, it was a central stronghold for the revolutionaries, the belligerants and for ISIS. What to do? The belligerants brought the whole war into the houses, in the old city, that is their strategy and that is the problem. Why, in Europe, are they blind to say that the government is targeting these structures? Yes, its true, but why? I can say this from my own experience, the same is happening in Aleppo now.

The civillians in the rebel held area of Aleppo, are they being used as human shields?
All of them! This is the whole strategy in the whole five years of war. Starting with Homs, Maaloula, my own town Darayya, the people were taken as shields to defend the rebels. That is why the civillians were killed. They were not allowed to go. Just like in Mossul now, not even the priests were allowed to go. They had to be there in order for the Government not to shell.

Now they can ask for ceasefires, but what to do next?

Would a ceasefire just drag this situation on? Would the best solution be for the Government to end the siege as quickly as possible, by taking the rest of the city?
A ceasefire is always an act of mercy. We are in the mercy of God. Everything in life is compromise. Even relations between husband and wife are about compromise. The same here with your enemies, you have to have compromises to protect the lives of the civillians. We have to think about that.

The policy of the church is to alleviate as much as posisble this very harsh time of the civillians.

Russia is seen by many Western countries as being part of the problem, criminals bombing civillians. When I speak to Christians from Syria they always have a very different idea of the Russians. What is your view of the Russian involvement?
If I am in danger, and you come to help me, can you help me without me? Without my consent? Without my advice? Without my collaboration?

Please, USA, come and fight! But with Syria and with Russia.

Let’s not do politics. Let’s speak in a simple way, like simple people. Come together Russia and America. Together. The European Union is no longer important, a shame, but the truth. If the USA and Russia came together with Syria in one month's time ISIS would be overcome. I am sure.

What is ISIS? It is a myth. It is an instrument of evil. Of a battle of interests. That is ISIS. It is nothing, not Islam, nothing at all!

Now Syria has become a supermarket for superpowers. Where are these interests? In Russia and in America. If they are ok and have common consent about their interests, where their respective profits lie, the war will end.

Who can build something new? The so called opposition are from the same school as the ones who are there. So they can bring nothing, nothing can be brought.

Reconciliation. Together, America, Russia and Syria can bring forth ceasefire and peace and also the renewal of Syria. We have to be renewed, we have to present a vision. You can't end the war without vision. Russia and América can end this, but they have to have a vision for Syria, and with Syria.

I am not for Assad or for the regime; I am for Syria, which is a key society in the Middle East. Not Lebanon, not Jordan, not Egypt, not Iraq, it is the most important place where Christians are a little group, but living in a cohesive society.

You have been criticized by leading figures in your own Church. Several bishops have called for your resignation. Is resignation an option?
I am for the cannon law, which says that the Patriarchal See is vacant upon the death of the Patriarch or by his own resignation. I like to tell my bishops "I love you. Let us love eachother so that we can confess, love, and serve our Church and make it a symbol of testimony for the Lord in this tragic situation for the whole Christian Middle East"

Can you imagine a situation where you would resign in the future? Or do you prefer to die in your post, as is traditional among Eastern Patriarchs?
That is up to God. I can't answer you, because I don't have that power. Let's just say that I am here for the service of the Church and the future is in the hands of God.

You are a special guest at the meeting of European Eastern Catholic bishops, who are discussing the pastoral care of migrants in the West. Have you come here to learn from them, or to share your own experience?
I was invited by them, especially by the Ukrainian Church, because I was in Lviv in September, in the synod of the Ukrainian Church and they told me about this meeting and invited me, and I was happy to come.

I am very happy to have come because it very important learn and to give our own experience and especially our own vision of the very tragic situation of emigration.

Emigration, for us, is very important, very problematic. It is very problemetic for Christians in Europe and for Muslims in Europe, and in encountering a region which is no longer a Christian Europe, but an area of globalisation, an area of Laicité, and in some respects atheist. This is a very big danger, more dangerous and more acute than the whole war in Syria.

For me it is a very current and urgent to have a special assembly of the bishops conferences of Europe about this theme. Europe is not prepared to have such a tsunami of migrants, both Christians and Muslims. How to cope with Muslims and Christians coming with their own identity. Islam has a different approach that Christians in Europe. That is a very big danger for...

*His Beatitude here used the word “parents”, but considering his age, and the fact that the word Parent in Latin languages actually means relative rather “mother and father”, I have changed it to relative.

This is the second time I interview His Beatitude. You can read the first interview, from November 2014, here.