Christians in Nigeria "live with fear in their hearts" 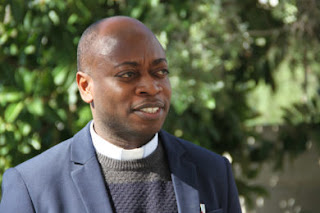 This is a full transcript, in the original English, of my interview with Fr. Gideon Obasogie, director of communications in the Catholic diocese of Maiduguri, in the extreme North East of Nigeria, bordering Niger, Chad and the Cameroon. The news report, in Portuguese, can be read here.

Your diocese has has been badly affected by Boko Haram...
Sure. It is the epicenter, the birthplace of Boko Haram.

Boko Haram has slightly disappeared from the news cycle. Is the threat still as real as it was a few years ago?
From your question I can take two important facts. You say it seems to have disappeared, but no, it has not. But journalists do not go in there to get news, it is difficult, it is dangerous and sometimes they don't have security cover.

On the other hand, it is quite true that compared to 2014, Boko Haram has been reduced to a small corner. They were pushed to the fringes of the Sambisa forest and to the Lake Chad region.

Though there have not been attacks in the city of Maiduguri, as we had in 2014, we have attacks on the fringes of the Sambisa forest every other day.

Have you ever been in this area which is more affected by the terrorists?
The parish I worked in until 2013 was displaced, attacked and burned down by Boko Haram. Though we fled, we were not killed, but we have a lot of friends, family and parishioners who were kidnapped or killed, and there was 100% structural destruction, because the priest's residences were burned down, one of the priests who was on a break for two weeks had his house looted and burned while he was away.

Of course, not all Muslims are terrorists. Has the persecution affected relations between Muslims and Christians on the ground?
As you said, I also do not believe that every Muslim is a Boko Haram terrorist. While we have some who are sympathizers, there are still Muslims who are very good at heart. As far as the relationship between Christians and Muslims, there seems to be some clear and quiet relationship, on a very good note, but people have fear in their heart.

There was a boy who lost his father to Boko Haram, when he was very young, and his mother found it very difficult to explain to him that his father was caught up in a bomb attack. When she was able to explain to him, at the age of 8, after four years of not hearing about his father's whereabouts - because there was no corpse to bury, he was cut up in the bomb blast - she told him that Boko Haram had killed his father. And the young boy, who was only 8, told his mother that when he grew up he would kill Boko Haram.

That is the situation we are faced with now as a diocese.

Besides the situation in your diocese, there has been violence between Fulani herdsmen and Christians in the rest of the country.
Nigeria is a very wonderful nation, a complex reality, a blessed nation. I still believe it is the giant of Africa. We still have attacks everywhere. In the northeast Boko Haram, in the South we have kidnapping, Fulani herders who have killed a lot of priests in Nigeria, Northwest, South, every part of Nigeria has its own bit of conflict and crisis. All this is a result of poor governance and bad leadership.

When we have good leadership, people ready to protect the interest of the nation, they should put security in place, so people can live in peace and harmony. So, we still have attacks every other day, people are being kidnapped, insecurity... People say its poverty that is responsible for these attacks, which I refuse to believe... Poverty has been there from time immemorial. Poverty cannot be the reason for kidnapping, where was kidnapping before? It could be, on a very social economic level, but I think the Nigerian leaders need to do more.

There have been accusations that the President, who is Fulani, has not been doing enough.
What the Catholic bishops said was just the blatant truth. The Government should stand up and do what it is supposed to do... protection of the life and property of the citizens. And any government that is short in that should really pack and go. The Government has been doing its best, we can say, but it needs to do more. President Muhammadu Buhari, when he came on board, made a lot of promises... But perhaps due to his ill health the status quo is still as it was in the beginning.

Are there also Christian Fulanis?
From the word go Fulanis have been very, very peaceful people. All of a sudden we see Fulani men carrying AK47s. In my opinion there is some influence of Boko Haram infiltration into the Fulani system.

I have never met a Christian Fulani, but I'm not saying they don't exist, there should be some. But what we are interested in knowing is at what point did the Fulani men start carrying arms? They carried sticks to protect their animals, but of late the conflict between them - which I know, people will say it has been there for a very long time between farmers and herders - but there should be a positive way of reconciling this crisis, it shouldn't lead to the loss of lives.

So do you believe there is outside infiltration by Boko Haram... Do you believe there are also other forces from outside Nigeria, trying to destabilize?
If you have been following the news of Boko Haram of late, it has a numeric strength of about six thousand fighters, which has been divided into two factions. There is ISWAP, Islamic State of West Africa Province, which has pledged allegiance to ISIS and we have the JAS - amā'at Ahl as-Sunnah lid-Da'wah wa'l-Jihād -, under Ahubahar Shekau. The Shekeu group are in the Sambisa forest, the rest are in the Chad border area. So, if there is a faction called ASWAP that tells you all you need to know, that it is linked to international bodies. We hope and pray that it should be exterminated and cleansed, because Nigeria is known to be a place for peaceful coexistence between Christians and Muslims. So, we still hope that we shall come to see days when we shall live without terrorism.

What has been the importance to ACN in Nigeria?
I am here at the invitation of ACN, about to present their report Persecuted and Forgotten? We, in Nigeria, dare to say that we are persecuted but never forgotten. Why? Because of ACN. Aid to the Church in Need has assisted not only my diocese, but most dioceses, almost every other diocese in Nigeria. They are rebuilding our structures, providing skillful acquisition agencies, medical health, schools for our orphans, because the diocese has about 15 thousand orphans and 5 thousand widows. The bishop is left to see how they are fed and taken care of medically, and ACN has been a very serious support, it has assisted the diocese in reconstructing our structures, in training the priests, in providing relief materials for Internally Displaced People. And I think that the diocese of Maiduguri would be nowhere without agencies like ACN.

Fr. Gideon visited Portugal at the invitation of Aid to the Church in Need
Posted by Filipe d'Avillez at 14:14