"Michael Nazir-Ali has an incredible intellect" 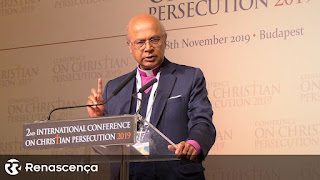 This is a full transcript of my short conversation with Monsignor Keith Newton, head of the Personal Ordinariate of Our Lady of Walsingham, on the recent decision by former Anglican bishop Michael Nazir-Ali to join the Catholic Church, through the Ordinariate. The news item can be seen here.

Were you surprised by bishop Michael’s decision to become a Catholic?

No, not really. I thought he would at some point. I hoped he would. So I wasn't over surprised, but I hadn't expected it at that moment. There was nothing that particularly happened that would drive him to make the decision now. But he had obviously thought about it for a very long time.

When the ordinariate was announced there were six bishops who came over. Have any others come over since then, besided Nazir-Ali?

There was one Anglican bishop who came over a few weeks ago, but he didn't join the Ordinariate. Otherwise, it was just Nazir-Ali.

How have things been going with the Ordinariate? Have any people gone back to the Anglican Church? Has the initial stream of people coming over diminished?

Nobody has gone back, as far as I know. Certainly no clergy have gone back to the Church of England. And I don't know of any lay people either. We obviously expected that after the initial rush it would be much slower, and it has been a slow steady stream. There are still people coming in each year. Not an enormous number, but still some, and still some clergy. We have four who are preparing for ordination now.

But I imagine he will be ordained also

He is a very interesting man. He is extremely intelligent and will be able to articulate the whole notion of Anglican patrimony, which is very important to him. He has an incredible intellect, and he will be a great asset, I know he will.

With his connections to Pakistan, is there any chance we could see the erection of an ordinariate in that country?

You'd have to ask him. He does have good links with Pakistan, he has links all over the world, really. The interesting thing about him is that he comes from an Evangelical background, so he is quite different from many of the others who have become Catholic, certainly the bishops, who are more from an Anglo-Catholic background.

Could that fact lead to the opening of a door to the Evangelical wing of the Church of England?

I don't want to make prophecies about this, but I think it will make some people think.

Even if not in terms of them coming over, perhaps a bridge in terms of dialogue and understanding?

I am sure that is absolutely true.