“To be pro-Israel is to be pro-Palestinian” 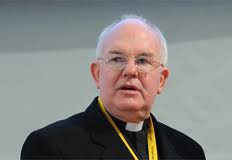 Full transcript of the interview with Archbishop Kelly, of Liverpool, about his recent trip to the Holy Land

What exactly is the Holy Land Coordination meeting, what is its mission?

These meetings were set up about 12 years ago by the Holy See. The initial idea was that the presidents of the Bishops conferences or a representative, of the countries which played a political role in establishing the present reality of the Holy Land would come together to the Holy Land above all to support the local church in two things, in its endeavours never to be silent in the face of injustice wherever it comes from, but also always to be a church which seeks to reconcile, and that has always been the focus.

As we know, the Christian community in the Holy Land has been diminishing, is that something you feel on your trips?

Every year when we go we are made ever more aware of the diminishing numbers and there is no doubt that a number of factors weigh down upon them. They feel very much, especially in a place like Bethlehem, that they are almost living within prison walls, their restriction of movement is so great, and indeed the movement across the West Bank. In our final communiqué we used the word was that they are living in a state of occupation.

We also experienced that very often there is wonderful work done in education, but for reasons I can understand, not least as a son of an economic migrant from Ireland to England, very often education opens up opportunities to go to other countries where they have more space and freedom.

So the diminishing numbers are a real factor, but there are many factors that bring that about.

Despite that, do you feel there is hope for the future?

There must always be hope for that. I always go back to the first pilgrim pope to the Holy Land who said, “If you want peace, seek justice”, then I am sure, if there is justice for the two peoples and three ways of walking before God, which are the reality of that land. If that justice is achieved then there will be peace and then the communities have more hope for the future. At the present time there is still the clear teaching of the Holy See in favour of a Two State Solution. One thing we also mention in our final Communiqué is that to be pro-Israel is to be Pro-palestinian, it is not an either or, for there to be peace for both peoples there has to be justice for all.

Just a few weeks ago we witnessed a fight between monks in the Church of the Nativity. The same thing often happens in Jerusalem, around Easter Time. Were these bad examples discussed?

It was mentioned. I gather it was more complex as to who was involved, certainly the leaders were not involved.

I know well the story of Ireland and have always found that wherever you have people suffering under a sense of injustice behaviour can go very wrong indeed. It is so hard to have a normal discourse in a context which has so many factors which weigh down upon you. It is tempting for me to say that this should not happen, but if I lived with this reality every day I am sure I would probably break out into words and actions which I wish were not there.

The article can be read here, in Portuguese
Posted by Filipe d'Avillez at 17:12